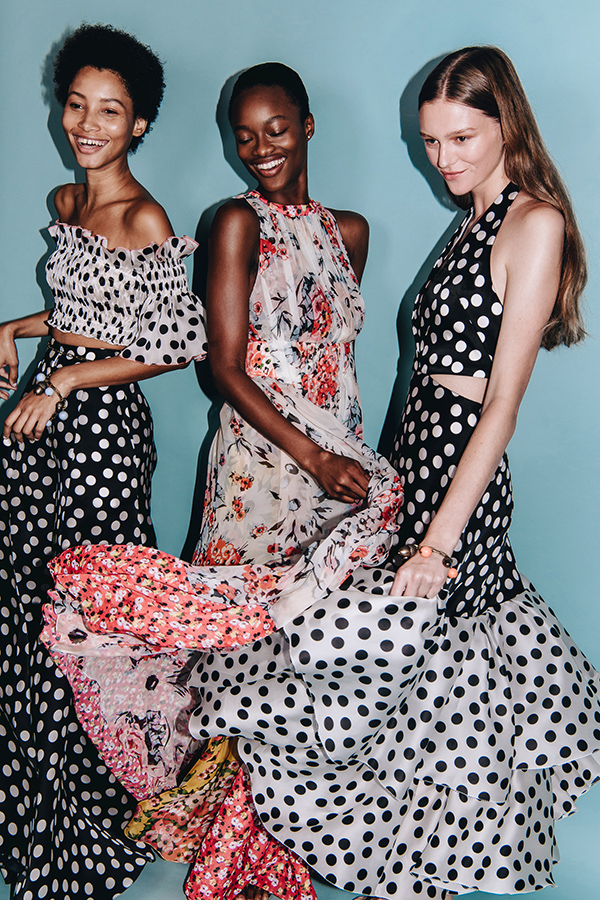 Spring holds the promise of rebirth and new beginnings: optimism, growth, the restart of a cycle, yada yada. So it felt fitting that there was a well-timed number of shows that harked to new beginnings at New York Fashion Week this Spring/Summer 2019 season.

At Kate Spade, it was a real test of continuity after the brand’s eponymous founder committed suicide earlier in the year. Though Kate Spade herself had not been with the brand since 2006, having sold the entirety of her stake of the company, the sort of easy chic she stood for has carried on in strength. Newer customers might not know the woman that is Kate Spade, but they easily recognise the style signatures of the brand.

This season, the Kate Spade brand took on a proper runway show to mark its debut collection by newly-minted creative director Nicola Glass. The brand previously showed with a presentation format while under Deborah Lloyd – which isn’t too far a departure from a runway setting considering how richly decorated the sets and locations were to begin with. Anyway, Glass looked, as all newly-appointed creative directors today do, to the archives of the brand for inspiration. Granted it wasn’t a deep dive into specificities, but Glass seized upon the founding Spades’ (Kate and husband Andy) straightforward optimism.

That meant pretty and cute but ultimately unfussy clothes, paired with a collection of bags that were far more direct and appealing than a lot of the comic-kitsch that has been coming out of the brand in recent memory. All at once, it was a style that could appeal to fans of yore who might’ve grown past it, and to a newer audience who might appreciate the more sophisticated touch. I liked that the mod styling didn’t drag the clothes into the past and instead suggested 60’s cheek and character.

Glass is an experienced designer, having worked under Tom Ford at Gucci and then on accessories at Michael Kors. It showed in the way she approached the bags, riffing off a spade motif for a subtle branding effect. The accessible luxury market is a tough one to get right: having to balance and justify price point and product. And really, it’s the meat and bones of the Kate Spade business. Good thing Nicola Glass looks to have a firm handle on those handbags.

Longchamp, another accessories-driven brand, showed its first runway collection in New York. It was to mark the brand’s 70th anniversary, but thankfully the creative director Sophie Delafontaine averted the trite story of looking to the archives to celebrate the future. Instead, she showed a collection of heavily fringed suedes, clashing patterns, and a lot of animal print. The effect was bobo mixed with a groupie, and it worked mostly if you looked at the individual pieces. The styling put too much together: leopard, Navajo, olive suede, blue strappy sandals, an excess of black and purple fringing on a bag. These were the parts of just one of a number of miscalculated looks. Lucky the clothes are window dressing for the bags.

At Boss, it was clear that the clothes are to stay a strong focus for the brand. Since Jason Wu’s departure the previous season, chief brand officer Ingo Wilts has stepped up to the plate to lead the fashion design. And what a relief that Wilts has both direction and the ability to execute. It seemed for a while that the German brand was floundering a little for what to do, exactly, with its clothes. Its mainline didn’t have fashion cred, and its young diffusion line, Hugo, has been unfortunately sidelined in a very competitive and crowded mid-range market. But the main Boss brand isn’t looking to challenge or push fashion conventions. It neatly but very ably occupies the space Donna Karan and the old Calvin Klein used to occupy. Well-made, polished, sophisticated, and beautiful clothes for a working person who doesn’t need the frills of fashion. The colours and fabrics were lovely, making even a pastel blush pink section look extremely sophisticated. There were high-sheen satins and lightweight cottons, then some supple leathers as the collection moved towards raspberry and neutral shades – a good variety.

I liked that the Boss collection understood what it wanted to provide and did so without pretense. The tailoring in the later half of the show, for instance, cut a sensual and modern line. On men, it hit a sweet spot of classic but young, and on women it had a sensual boxiness. Sounds oxymoronic, but it’s no small feat to cut so a woman’s suit both moves with the body and commands authority – not unlike the kind of purity that early Jil Sander work had.

Carolina Herrera has passed her reins on to Wes Gordon, a young American designer who’s now the creative director. Gordon used the word ‘happy’ to describe the thrust of his first collection for the house of Herrera. It’s a good starting point. While Herrera has been a bastion of Park Avenue style, it has been in need of a refresh. And Gordon’s youth brings a cheerful innocence to the affair. The head-on use of flowers – sublimated as a big motif on skirts, as embellishment on tailoring, and splashed vibrantly on sunny dresses (sometimes spliced and merged) – was energizing. It built on the sort of Latin verve that Ms Herrera has often used to power her clothes. Gordon was wise to tap into that facet of the brand's namesake founder.

Meanwhile at Oscar de la Renta, the Monse pair are doing a fantastic job with continuing and modernizing a big old New York name. Fernando Garcia was quoted using the word “nomadic” when describing the collection to WWD. And indeed, he and design partner Laura Kim used a combination of their international sojourns as a springbed for this season. Some places mentioned: India, Como, Italy, Marrakech and Croatia. That meant a lot of fringing, crochet, silk scarf prints, and tassels. At its best, it looked like a worldly woman bringing home her fashionable prizes from her travels. The pair, however, have a tendency to veer a bit too close toward either their own Monse mode or that of the late de la Renta – to the detriment of the design. That is, too young and too old. The more fringe and feather-driven outfits felt a touch too contrived, as did some of the heavier evening gowns that looked a bit over-wrought. It was in the simpler moments that modernity shone. One such outstanding look was a ribbed orange sweater with a fringed hem worn off the shoulder, paired with a printed silk skirt with its hems and edges trailing off into multi-coloured fringe like an artfully unfinished edge of fabric. Fernando Garcia and Laura Kim have a very powerful and convincing vision for this house, it’s just a matter now of narrowing into it and leaving out the unnecessary – even if that means shedding parts of the past. 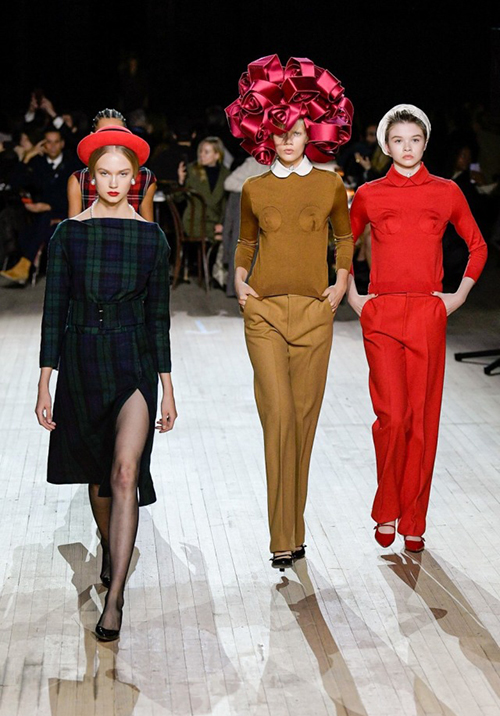